Only two weeks left working remotely from Hoi An...

Only two weeks left ...where did the time go...

Easter weekend so pretty quiet work wise for me so I caught up with Tracey from Wide Eyed Tours at Felina Cantina (An Bang beach) where they serve the best tacos and if I could bottle his special sauce and sell it here I would be worth millions!!
Tracey showed me around the new hotel that Travis from Wide Eyed Tours is building in An Bang as well as several of their villas.  The  villas are in their brochures and on Expedia etc and a great option for families/ groups of friends and quite unique to Hoi An and An Bang would definitely be my preferred spot - a  mere VND80000-100000 (USD$4-5) from the ancient town but it is so chilled if I had my time again and I hadn't come in the high season would have opted to live out there.
On the way back into town I checked out Essence Hoi An.  Loveliest staff and all the rooms were lovely - modern but with a touch of Vietnamese influence.  The new wing has some higher level accommodation with its own full own deck option which I loved and their own pool/bar etc and soon to have butler service.  The room in their original wing look out onto the paddy field which is an amazing outlook.  Slightly out of the ancient town but bikes to use and transfers into town and the beach. Two pools on the property for both the old (not that old ) and new wing.
The other hotel I checked out is the semi newly opened Lasenta Hotel.  Beautiful hotel, modern rooms and an infinity pool over looking the paddy fields. Important to note however that the infinity pool isn't huge and as I was there in high Season (not NZ's but everyone else's apparently)  that it appeared cramped and staff as lovely as they were hard to converse with.  Still a great location half way between the ancient town and An Bang.
No photos to share sadly as I didn't have my camera with me but they are on my Instagram page under kiwitravelguru

That Friday (Good Friday in fact but as Easter is not celebrated it felt like just another day- no Easter esggs or hot cross buns in Hoi An - not a bad thing if you look at it in a diet way! ) I did the Vespa Adventures Street and eat tour which was great.  Fantastic guide and safe drivers and I got to see parts of Hoi An I hadn't got to in the last 7 weeks.  Amazing food , a trip down the river to set off lit candles and make a wish that I never did during a full moon because of the insane crowds, and plied with alcohol along the way. I ended up on a tour with some English expats working in Hong Kong making the most of the long weekend (1.5 hr flight for them).  Great group, and I can't recommend it highly enough.  I wouldn't recommend it for my folks in their 70's as I wouldn't trust them to be on the back of a bike but the guide and the drivers were great and as I said before the food was amazing.  One of the English Hong Kong expats had done it before and talked his friends into doing it again...and if that's not a recommendation I don't know what is!

Obviously in your last few weeks you finally think about tailoring (in a city that it renowned for it) .  My landlords daughter took me to her friend around the corner from where I lived (I believe you should shop locally) to Huy Bao (49 Phan Boi St) who made me two amazing pairs of boots and handbags to match along with a birthday present hang bag for my sister (made to her measurements!).  The shoes were made to measure and I picked out the leather , heel type and style and were rapt with them.
I went into the Yaly(  358 Nguyen Duy Hieu St Shop) and picked up some great winter (ie NZ weather dresses) but the reality is that for one of the dresses (a premade dresses that I saw there and liked that they copied which I had to get them to modify ( shorter armpits etc..) I  went in for 5 fittings for it still to be not quite right. The average stay in Hoi an is 3-5 days so it would not have been long enough had I not had more time and it being just around the corner.  To be fair they have a huge number of stores and clearly an army of tailors and like every tailor I went to make it their mission to get it right. they are known to be the best and generally charged more for that reason .
Across the road was Blue Lantern Tailor (331 NguyenDuy Hieu St) who made some amazing copies of a De Nada dress and went out of their way (on the back of the motor bike to 4 fabric shops to find the perfect material ) to meet my expectations. My sisters friends who were passing through got a woollen coat, dress and other items made in 2 days that they were rapt with it.
Two days before I left I used a tailor Bao Diep (which was close to the Hoi An Historic Hotel) -28 Tran Hung Dao St.  I had a picture of a merino hooded top/jacket that I wanted copied.  Given that it was made out of cashmere/wool it turned out great.  It did have to be tweaked a few times and I'm grateful for their patience with the changes I wanted done in such a short amount of time!
The reality is with Tailoring that unless you are copying something or want a basic shirt/dress/suit made you have to allow time and days for refitting which most don't.

Friends of my sister's were passing through Hoi An so I took them to one of m favourite places Lantern Town Restaurant - 49 Nguyễn Thái Học - the email address if you want to book is lanterntownhoian@Gmail.com (where I had meet the owner previously and sold them on the amazing duck spring rolls). Sadly our pre drinks took longer and they had run out . But they went back the next day for dinner when I was out with other friends and agreed with my recommendation.  To be fair all there dishes were great but any duck dish there is to die for.
We went across the river from the old town where the bars are open later and had a quick look at the night markets and had a few drinks at a bar along the river before being chucked around midnight (my latest night out in  the whole 8 weeks away!!).  Its not recommended to use a motorbike taxi at that time of night - use a proper taxi if its too far to walk back to your hotel from.
I also took them to my other favourites Felina Catina and Soul Kitchen at An Bang the following night and we had a great time.

That weekend I had booked myself to stay out at Victoria Beach Resort.  I first saw the resort in 2004 on a famil and sadly the beach out the front has been badly eroded away but the hotel does have its own really nice private beach next to hotel and I can see why so many of my clients have opted to return to the resort year after year. The hotel generously upgraded me to a deluxe ocean view room which was fantastic.  Its a lovely property. 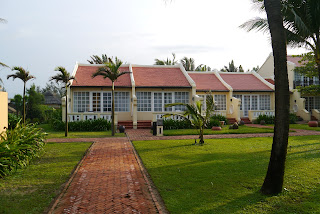 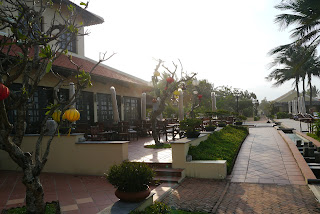 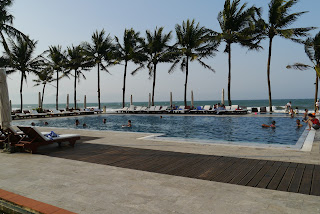 While staying at the Victoria Beach Resort (out at Cua Dai Beach) I took the opportunity to have a look at some of the other hotels in the area.
Hoi An Beach Hotel is across from the beach and backs onto the river.  They have their own private beach across the road.  Two pools, nice rooms and nice and handy to all the restaurants, mini mart etc. 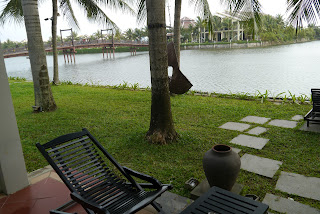 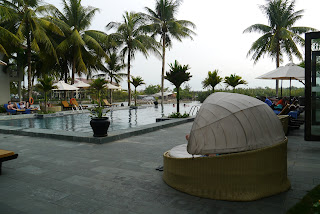 Along the road from the Victoria Beach Resort is Golden Sand Resort and Spa which has a massive pool and all the rooms have balconies. 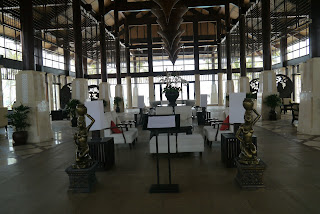 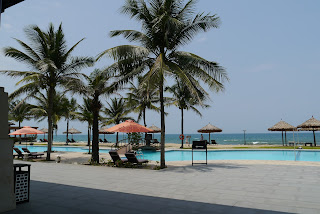 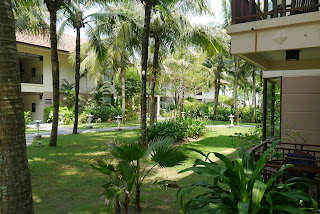 Along from there is Sunrise Premium Resort and Spa which is the newest of the 3 along this stretch of road (Thanh Nien Road).  It is the furthest way from where a lot of the restaurants were but there were places across the road.  The only room type I could see was the deluxe room which was lovely but has more of a Juliet balcony - ie you can open up the sliding doors but there is no where to go. Out of the Victoria, Hoi Beach Resort, Golden Sands this is the most modern. 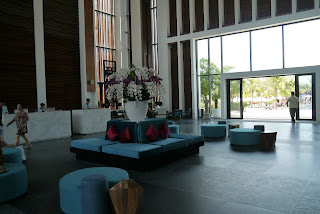 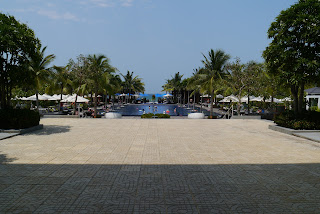 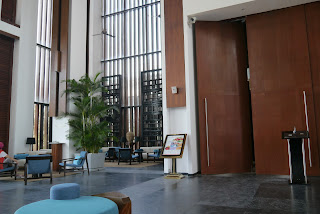 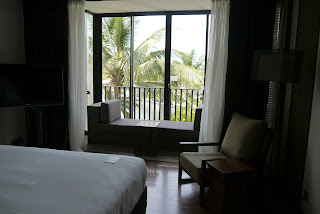 The last Hotel I checked out in the area was the Palm Garden Resort which is on a different stretch of Cua Dai Beach and has a great beach front area as well as pool etc.  Its a big resort nicely spread out and again has been a favourite for some of my clients in the past. 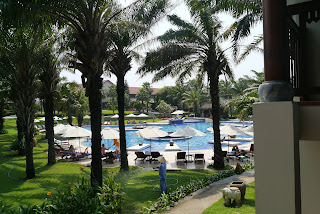 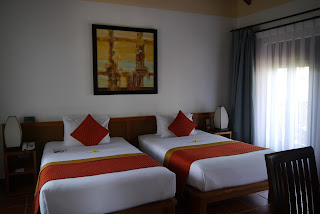 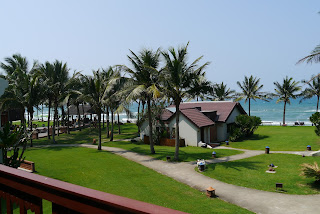 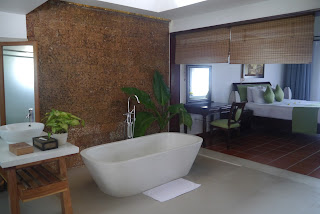 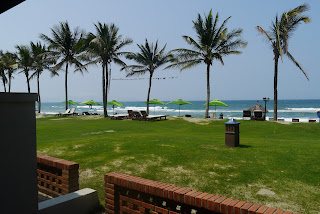 The Cua Dai beach area is still only 4-5 USD in a cab to get to the old town with many of the hotels offering shuttles into the Ancient/old town area.


After a relaxing weekend at the beach I headed back to my house in town and on the sunday night (4-7pm - I think I finally left at 9!) I went to the Hoi An Expats monthly (April) social gathering at O'Malley's Bar and Grill (part of the Anantara Resort) which conveniently was minutes away from where my house is. The charity of choice this month was the Hoi An orphanage.  Perfect for me as I often grab the toothbrushes etc at hotels that I stay at to give to either Ronald McDonald house or women's refuge at home. Naturally they welcomed them and it was less excess baggage for me.
I met up with some people I had met at the March get-together and organised to catch up with a few of them for my last week in town.
Amongst other expats I had met previously, I caught up again with Sharon and Stewart from Hoi An Now  who are a lovely couple who run the website and are a wealth of information. It is a must check out site if heading over to Hoi An as it is an insiders' guide for tourists and expats about everything Hoi An. Activities, restaurants, shopping, essential information, family, tours.