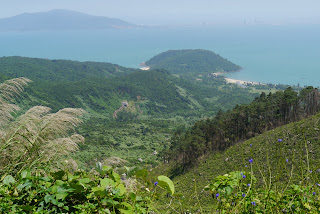 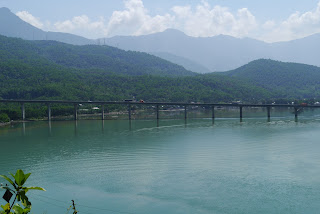 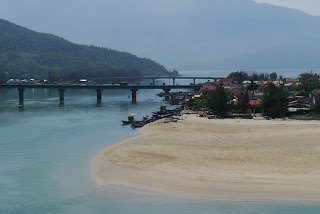 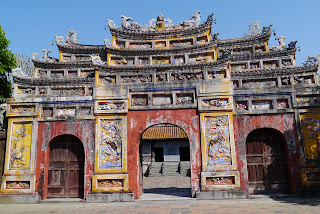 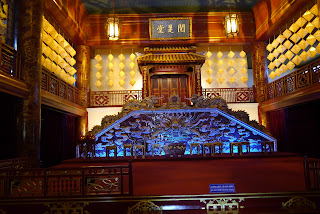 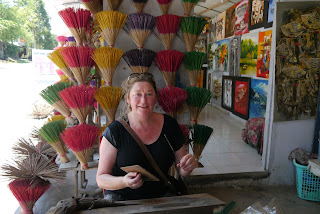 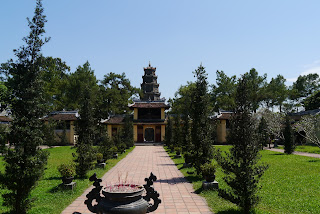 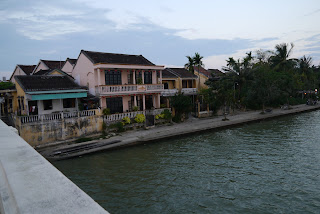 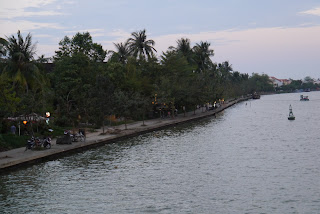 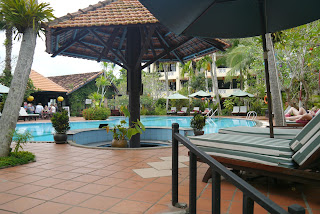 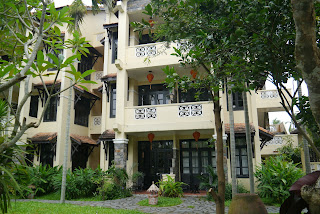 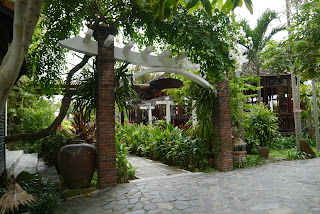 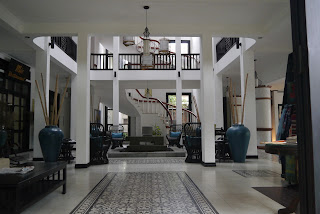 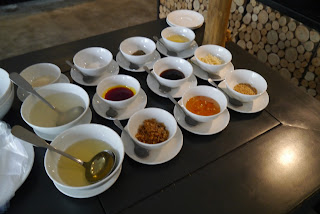 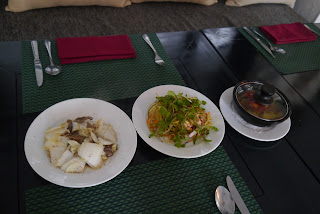 Well I moved into my lovely place along the river, close to the Central Market and all seemed good.   After the influx for the full moon, Hoi An has gone back to the charming, pretty, mainly chilled little town that I recalled it being...(FYI that it a pic of the Ancient town now my house) 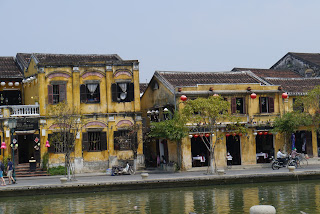 Moving was significantly easier than any other more I have ever done (only one suitcase) and I set my desk up looking out over the river and with the balcony doors open it gets a great breeze.
However on my second night here, while chilling on the couch watching a bit of TV, I noticed something fluttering near the roof in the lounge.  Given that I am not good with moths and other flying things I opted to go down the path of denial and just take myself off to bed....much safer than investigating further!
The following day I noticed quite a few mouse like droppings on the floor which I believed could only have been made by either a mouse, gecko or bat.  I was pretty sure it wasn't a mouse or gecko so that only left a bat or bats...given the amount.  I spoke to the landlords daughter who informed that there were 3 but they had caught two....excellent I thought - lucky me!  The landlord put up some fishing netting across the balcony but sadly it wasn't completely covered and I woke up the next morning to about 5 dead bats that had got in but couldn't get out (including the one in my lounge) - all very traumatic!  After a night of being bombarded by the distressed bat after me trying to swat it with a broom (I felt like I had played a complete game of tennis at the end of it) , I did what any logical person would do and booked myself  3 nights accommodation and moved out!
I booked myself into the Hoi An Silk Village Resort which was like a little oasis away from the hustle and bustle of the old town and of course the bat! 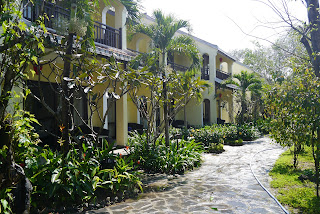 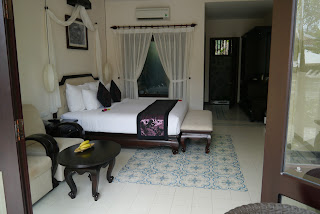 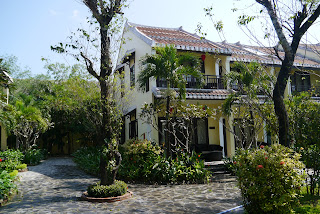 In my absence the Landlord had caught the bat and had completed bat proofing the house.

During my stay at The Hoi An Silk Village I replied to a dog sitting request on the Hoi An expats facebook page for a week in case the bat hadn't gone.
The dog sit was for a lovely young English couple have a brand new house - maybe 15 mins from where I was, and a rescue dog called Hobo.
I joined the English couple and their friend Maria for dinner at The Beachhouse in An Bang beach the night before they left.  Lovely relaxed place and great food.
Hobo was the poster dog apparently for Vietnam Animal Aid and Rescue...famous no less.  Lovely dog and it was nice to have a dog around after losing mine almost two years ago. However, dog walking in Vietnam is a whole different ballgame as most of the dogs wander at leisure and most houses have their doors and gates open.  Hobo is a small dog, with a big dog attitude and mentality ,and seemed to take delight in winding the dogs up on his daily walks!  Much as I was sad to leave after a week I did find dog walking here incredibly stressful.

While I was in the area though I did go and check out Ancient House Village Resort and Spa, which I had stayed at in 2004 not long after it opened.  Nice rooms and a nice little resort in a pretty good location - halfway between the beach and the old town with several good restaurants around it.  A colleague did advise that she had seen a review (which I couldn't find) that talked about bats in their room....ah the joys of balconies, and an area close to the river with lots of trees!! 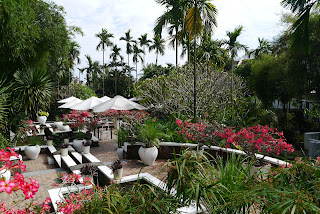 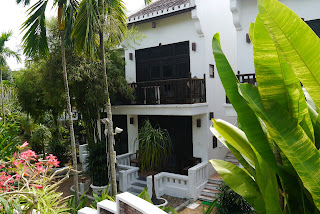 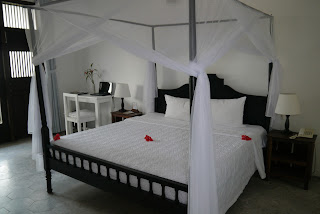 Nearby is the Havana Café, where I had a great Vietnamese pancake and Mojito for lunch.

Now that I'm back in my house, I have begun checking out some of the many restaurants, cafe's and bars in Hoi An.
There is a sports bar down the road , 3 Dragons where I watched the Hurricanes play and it has a lovely restaurant part on the riverfront which serves really good food.  Along the riverfront are numerous cafes and restaurants.  Near by is Hill Station which is in a stunning little building and offers some great platters of cheese, pate and charcuterie (as well as numerous other options) along with great wines.  Its a popular place you need to get there early to get a seat out the front (which I prefer).  My favourite lunch Banh Mi place is a short walkaway and always has a line of people queing up- Banh Mi Phuong.  Last night, I met up with an Australian girl, hoping to work and live here, for a meal at Good Morning Vietnam which does great Italian food.  Western prices by comparison to a lot of the local Vietnamese restaurants but at USD20 each for shared bruschetta, 2 mains and a bottle of wine it is still cheaper than home!

I found a great little spa around the corner, Five Senses Spa and Beauty, where I have had several massages now and pedicure.  I can't complain about USD$10 for an hours massage....

Last week I also checked out the Almanity Hoi An Resort and Spa which is stunning.  Lovely rooms, a great pool area and an amazing spa and quiet/yoga area.  It is very popular with The NZ and Australian market and with good reason. 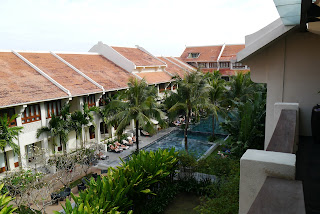 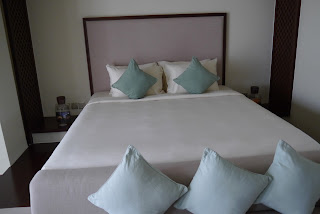 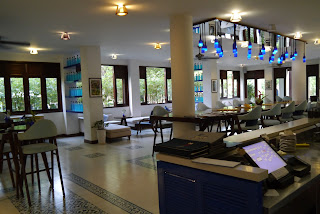 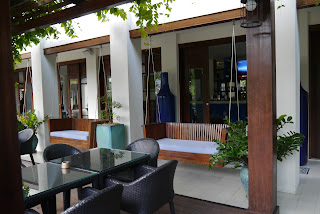 It was on the way to the Military Bank (MB)which is the only ATM that gives up to 10 Million VND - well worth the trek (from my place at least) to the corner of Hai Ba Trung and Ba Trieu Street .  Most ATM's have a limit of only VND2 Million (approx. $100 ).

I'm off to Hue tomorrow for three night's to do a few tours and to have a look at some hotels....
Posted by Chris at 01:05 No comments: