Sometimes trying times present fantastic opportunities. ...
Due to a lack of rental accommodation in Wellington, I decided to take advantage of not paying rent and give working remotely a go....8 weeks of it.  I opted for Hoi An for 7 weeks, a destination that I would have almost given a money back guarantee on.   On my way there I spent 4 nights in Siem Reap and then 3 in Ho Chi Minh.  My cousin and his wife and her family were also in Siem Reap at the same time which was great.


Week 1
Siem Reap I really liked, and my cousin came with me to have a look at some hotels (posing as my photographer as he was keen to get ideas ). The hotel I stayed at in Siem Reap was J7 ,which was a great choice if I do say so myself!  It is a newly opened hotel in a great location with fantastic staff.  I couldn't fault it.  I also had a look at others including the Victoria Hotel Siem Reap which is a colonial style hotel, Shinta Mani Club  and the resort across the road which was lovely, Lotus Blanc Resort  and the Anantara which was to die for.


I feel pretty fortunate to have come to Siem Reap in 1998, when there were very few tourists by comparison visiting the majestic sites of Angkok Wat and Ta Phrom.  I saw all the ancient ruins in 1998 but this time just wanted to see my favourites.  I think the tuk tuk driver was amazed at the speed in which I revisited them but for me it was manic. I just couldn’t handle the busloads of tourists (and steady stream of Tuk Tuk’s) and the heat…still I got some great pictures and two blessings.  Both ( and all the others - Bayon Temple etc) are must see's on any Siem Reap itinerary but getting up early is best to check out the ancient ruins (if for no other reason than to beat the heat).
One monk seemed to splash/spray me with excessive amounts of water – either he could see how hot I was or believed I needed to be cleansed of a lot of sins (I’m going with the first option!). 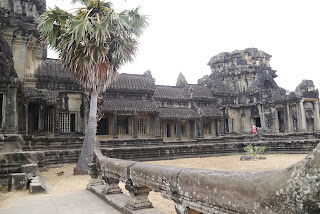 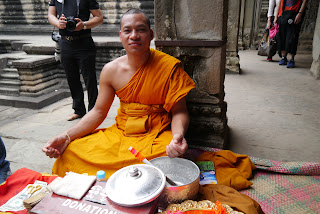 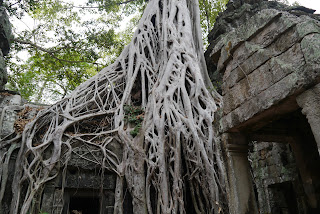 I loved the fact that at night you could walk around in Siem Reap without horrendous traffic/constant tooting and it was quite pleasant walking (temperature wise) back to the hotel from pub street.  We had a great meal at Malis on the last night.


Ho Chi Minh (formerly known as Saigon)by comparison was insanely busy and while I was kept busy looking at hotels, I couldn’t wait to get out of there fast enough.  Too be fair there seemed to be more pedestrian crossings than I recall but they don’t count for much as although the car/buses stop, motorbikes still seem to go through on a red. I stayed at The Rex Hotel which was fine but dated and there are better options in Ho Chi Minh.   I knew its location which is why I picked it....well that and the rate at the time I booked. I booked a suite as it had a balcony but it wasn’t a balcony as I know it.  Maybe 50-70(?) centres wide - it was tiny and as it looked over a construction site hardly seemed wothwhile.  After checking out the The Grand Hotel I came across the newly opened The Myst Dong Khoi which I just loved and will happily promote - Uniquely  Vietnamese.
I also checked out the Hotel Continental Saigon, a colonial style hotel in a great location with massive rooms and lovely high ceilings.  Nearby is the 5 Star Caravelle Saigon.  The rooftop bar on the 9th floor, Saigon Saigon,  will be forever immortalised for its role in the Vietnam War as the location of the daily war correspondents briefing and their watering hole of choice throughout the conflict.
I did an Urban Adventure's food tour one night which was a great chance to sample some great local street food.  The lovely Australian family that I did the tour had said they would never have eaten off street vendors and really enjoyed it, which is what the tour is all about.  I however, happily eat off the street but enjoyed the tour and we ended up at a very cool coffee place (mockingbird coffee) which I would never have found..


I also did a full day Mekong Delta speed boat tour with Les Rives Experiences, which was recommended by one of the wholesale consultant’s I use..  A good tour ..a few nice stops along the way and then a walk through the market before having a great lunch.  No crocodiles apparently in the river anymore which is hardly surprising given the rubbish in the river and the number of crocodile skin shoe and handbag shops in town.  A good mix of people on the tour.  There was a kiwi and his Australian wife and their 2 year old daughter, who are living in Danang.  A very cute girl who was a hit with the locals – she spoke amazingly clearly for a 2 year old and was heard saying ‘no photos’ on more than one occasion.  I could relate – being fair headed growing up in Hong Kong, I recall having the blonde hairs on my arms pulled and my cheeks pinched constantly!  There were a few Americans, all nice, but the one who stood out was (in more ways than one -definitely a Trump supporter which I found interesting) was from Mississippi (think southern accent).  He took a photo of a shanti town like house along the river, saying that he would send it to his wife telling her he had brought her a ‘riverfront condo’!  There was a nice Canadian couple and then there were the Ukrainian Kardashians.  A group of young women, and a bar owner (maybe their boss) who were living in Ho Chi Minh (belly dancers apparently although all but one had a belly) who were selfie queens.  When a python was brought out for photos, one did pretty much a whole photo shoot of herself in supposedly sexy poses with the snake.  Animal cruelty groups would probably have a field day with subjecting the snake to this.  She was mortified to hear later that the snake was a female!  All in all an entertaining day!


And now onto Hoi An.  I arrived on Saturday which was the full moon lantern festival which I was quite excited about when I realised that I would be there for it.  As I drove in from Danang airport I was staggered at the amount of traffic and new developments since I was last here a few years ago.  I don’t recall as many traffic lights but given the number of cars and motorbikes now they are clearly needed.  My hotel, The River Town hotel is across the river from the old town and fronts onto the main river (maybe 10-15mins walk to the ancient town).  A newly opened hotel with a fantastic staff, a great pool and really good food.
That night I arrived I headed into town to take in the festivities but was mortified at the crowds.  Apparently there was a Korean and Japanese exhibition/show on also for the full moon.  Definitely  a WTF moment -I have never seen so many people crammed into the streets in my life – it was hideous.  There was a post from a member on the The Hoi An Expats facebook page that stated he had stopped counting at something like 106 coach buses.  I seriously questioned what I was doing here and found myself googling ‘chilled places in Asia to live’ and even emailed an apartment rental company in Chang Mai on Sunday night as I hadn’t heard back from the rental guy here and was over it.  The days are fine but night-timewas insane – I have no idea where they all get bussed in from.  Apparently it is the high season.
Definitely not the hoi An that I remembered but to be fair I have never been here at this time of the year and the first few days do not make a trip.

Anyway on Monday I heard from the rental agency , Nha Toi Real Estate, who seem to do all the rentals here, and on Tuesday I set off on the back of his assistant’s motor bike to check out 4 houses.  The ones that I had liked on their site had gone.  The ones they showed me were all nice places and most were supposedly in a good areas but seemed to be down a series of alley ways in the middle of nowhere and I was sure I would get lost finding it again ...and definitely after a night out.. My new house is along the river near the Central market so close to the ancient town but from the other end of the town to the hotel I’m currently in.  It is a two storey, 100 sq metre traditional wooden house next door to the owners (Mama and Papa – I met the daughter who can speak English when I saw the house and met Papa when I signed the contract – he doesn’t speak English but smiled a lot so I’m sure that’s good).  It has a balcony upstairs off the lounge that overlooks the river and gets a good breeze.  Two bedrooms – the one downstairs seems cooler and a kitchen , dining table etc.  two bathrooms – one upstairs /one downstairs.  It has aircon, portable fans, a fridge, beds, lounge suite, TV and fibre optic internet (we’ll see).  I figure I will work upstairs and sleep downstairs but time will tell.  It had a mosquito net on the bed but not attached above it so I may have to do some home improvements!   Given my dislike of bugs/moths etc I think it is safe to say that I will probably nuke the place on arrival.  It’s a good location and I like the fact that the owners are next door if I go way for a weekend and just security in general (although I don’t feel unsafe here at all).  USD$600 for the 6 weeks + utilities (supposed to be around USD$50 per month).  Along the riverfront (I’m almost at the end)  are lots of restaurants, cafes etc and I am walking distance to the market and ancient town with all its restaurants, cafes, bars etc so I should be fine.  As the food is so cheap I can’t see me doing any cooking except for maybe a class or two. I think it is safe to say this will be the easiest house move I have ever done!

There is a Hoi An expats monthly group (I’m not sure if I count as I am only here for the next 6 weeks but found it on facebook) get together on Sunday which I will go to.  Each month they do a get together for a token fee/donation which goes towards a charity – this month was the Vietnam Animal Aid and Rescue which works for me!  This month it is held at The Atlas Hotel, which is a nice boutique style , newly opened hotel within an easy walk of the ancient town.


I seem to be sweating profusely all the time and drinking at least 3 litres of water a day, so that along with my 15000+ steps (my fitbit must think it has a new owner), and much better food choices, must surely lead to obscene amounts of weight loss.  Time will tell.  I look around and I swear I am sweating more than others, even those bigger than me, so perhaps my friend is right and I am pre-menopausal in which case I should have gone to a colder climate as April is generally hotter in Hoi An and I fear I will die at this rate!